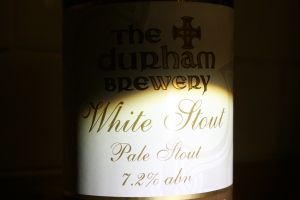 I don’t really go in for reviewing beer myself any more, I gave it a go and decided that I got more from reading other people’s thoughts.  But now and then something fun comes along, usually through Twitter, and when The Durham Brewery announced a hashtag (#whitestout) beer tasting I thought I’d get involved.  Having already commented on the White Stout concept I’ll just cut to the chase.  More details on the event here.

Billed as a Pale Stout, it was unsurprising that a pale golden beer emerged from the shadows of the bottle.  I didn’t have to waste valuable time agonising over the concept as I had already read what Sean (the brewer) had intended when making what some might call an oxymoronic beer.  In my mind it stays clear of bold claims and it is the chatter surrounding it that has been cleverly harnessed to make the most of its assets. 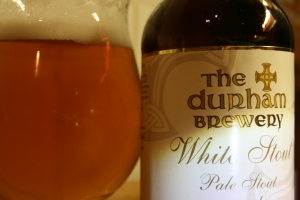 The bottle opens with a pop and a quick sniff reveals a strange aroma of straw and what I could only describe as the Jelly Belly Bean toasted marshmallow flavour (yes I know a flavour is not a smell).  It pours with crystal clarity and is a lively little so and so.  A billowing head forms and then settles, but didn’t go anywhere until I drained the last mouthful. The aromas in the glass were subdued, and as I read over and again on Twitter, the beer definitely changes with temperature.  I started from chilled.  The flavours were still pronounced, with biscuit malt and grapefruit/lemon bitterness and only later realised that they were subdued by the cold.  Over the next 30 minutes as it warmed a little, the aroma released more of the fruity hops and as one person described it as “Haribo-esque” character.  I’d agree with this, but would also say that it had a more grown up Belgian candy sugar quality to it.  The malts were coming through as musty and or damp, but I kept coming back to the toasted marshmallow jelly bean flavour.  The last third of the glass really started to show the beers true colours (no pun intended).  The alcohol was heavy and refusing to let anything else stand up to be counted.  I broke out the mature cheddar and can report that it saved the beer at this point in its transformation.

I must say that I enjoyed the beer cold and would buy it should I see it in the pubs, but I’d definitely want some cheese to go with it if I was having more than a refreshing quick-half.  Thanks to the brewery manager Elly (@durhambreweryel) and Sean (@dbrewersean) for the beers, and to those who helped coordinate, for an enjoyable and light-hearted interlude to my evening.  Keep up the good work!

Colour is a means of communication, we instantaneously recognise a meaning or a message where colour is present.  It’s a non-verbal cue that taps into our learned associations and we use it on a daily basis to help us stay safe, fit in to our surroundings and determine what we will eat or drink.  We can have a lot of fun with colour and it is possible to manipulate a recognisable object and make most of us look twice.  The novelty value of engineering a red banana or blue carrot is likely to be short lived, but try convincing a child that green rice pudding isn’t brilliant!

The colour of beer is determined by the malt and is measured using one of several scales, the  Standard Reference Method (SRM – “Degrees Lovibond” or “°L” scale) being one.   Colour is important (to some) when characterising or categorising beer, there is of course the opinion that colour isn’t everything, but lets not go there.  We know where we stand when we order a lager or a stout, we know instinctively know what the first sip will offer.  Well we could rely on visual priming until now anyway.  If you keep up-to-date with the latest beer news, then it won’t have escaped you that there have been some recent developments which are causing a stir, some debate and in one case an affirmation of tradition.

Richard Fletcher – Journal Live –  got a great quote from Durham Brewery owner Steve Gibbs in his article back in December 2011.  Steve isn’t about reproducing a beer, he prefers to take original styles and “Durhamise” them.  Which is exactly what they have done in brewing a 7.2% abv White Stout (launched Nov 2011) .  They describe this as a “modern pale stout“.  That’s right, it’s not just in the name, this is a pale, full bodied – and taking the word ‘stout‘ literally – it’s a strong beer.  I tried it on keg at Mr Foleys and it didn’t disappoint.  I bought a pint just to make sure.  From my memory it was a golden syrup sweetness, fruity, big mouth feel and oh so bitter.

While the word “stout” has come to mean a dark beer, the original meaning was strong and true. Before the porter brewers commandeered the word to mean a stout, or strong, porter it referred to any strong beer – Durham Brewery

Interestingly, and most likely a facet of being Durhamised, is that they use American Columbus hops, not a ‘traditional’ hop choice for representing a 200 year old beer style, but where would the fun be in being traditional?  If a brewer decides that Columbus is the hop that will produce the bitterness, flavour and aroma they desire, then that is the best hop choice.  While we’re talking brewer creative licence, I happen to think Durham have got it spot on.  Their White Stout is a heavily hopped (72 IBUs bitterness), strong beer and crucially it has the body to carry it off.  Just to add, heavily hopped doesn’t always equal ‘bitter’, they could be used as late copper hops for subtle bitterness and maximum aroma, which this White Stout also has in abundance (the aroma that is).  The only blog reviews and resulting comments I’ve read are few, and with mixed reactions.  I think this is more to do with the limited availability at present, but expect to see more opinions as the bottles hit the shops.  Also, I think that a change from the ‘norm’ is a challenge for some people, with their initial reaction almost predetermined: “but it’s not black” and reject the idea as ‘no added value’, to which I disagree.

There are other examples of this alchemy and more readily available in the form of the much debated Black and Red India Pale Ale’s, but the only other brewery to get involved with pale stout’s is BrewDog with their Abstrakt AB:08 an 11.8% abv “deconstructed imperial blonde stout” no less, which I’ve read is amber/gold in colour (a 6500 bottle release December 2011).  Pleasing to see a brewery steal the march on BrewDog for once.

So I understand from eavesdropping on @DurhamBreweryEl ‘s Tweets  and a brief email conversation that the second brew of their White Stout is bottled and nearing distribution.  Always worth waiting for your beer to taste just right before releasing it into the wild.  The beer plains can be a harsh environment.  So having casked the first brew and bottled the second, the third brew will be on cask and keg and hitting pubs next week, but if you really can’t wait that long then get yourself over to the brewery’s bar on Saturday (21st Jan 2012) and fill your boots, so to speak, although that is one way of taking beer home with you.

Friday night I went to see The Lemonheads play live at Leeds University.  I would have been about 14 when I would copy my brothers vinyl to cassette using his massive 80’s stereo and then listen to them on my massive 80’s Walkman.  I was heavily influenced by his taste in music which spanned Sugar to Sepultura and The Cure to Corrosion of Conformity.  It was a great music education, but sadly one that I never made my own and now when someone asks me what music I like, I tend to mumble something about a band with enough conviction for them to change the subject.

As my brother and his friends reminisced about going to see the likes of Nirvana, Pearl Jam and Radiohead when they were touring small bars and clubs, I reflected on live music opportunities missed during my teenage years.  So I jumped at the chance to go and see an aging Evan Dando belt out tracks from their 5th album ‘It’s a Shame About Ray‘.

We turned up to the gig fashionably late having made our way via a couple of public houses, I even nipped to Mr Foleys to quench my thirst with a pint of Durham Brewery‘s ‘Bullion’ and try Magic Rock‘s ‘Bearded Lady’, a 10.5% Imperial Stout which did not disappoint.  Once inside the University building we just had time to grab a bottle of Newcastle Brown Ale, before taking our place behind the sound desk.   The average age of the crowd was probably 35 and you could tell.  A sea of heads nodding to the beat in appreciation in what was a subdued [world weary] crowd.  As we were treat to every track from the album I sipped on a pint of Tuborg and took a trip down memory lane; remembering listening to these tunes while trudging the paths of my paper-round, on the school bus when I should have been talking to my girlfriend, and when I was old enough to make it into Tumblers night club where the Red Stripe flowed freely. 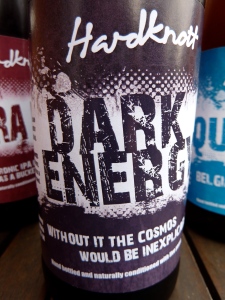 Music was definitely the focus of the evening but beer is never far from my thoughts and as I looked onto the sound desk, and beyond, I was intrigued by one of the engineers as he swigged from a two-litre milk carton.  I’m not saying this wasn’t milk, but I reckon it was a milkshake of sorts.  On the stage, Evan Dando refreshed his vocal chords between each song with a hit from a bottle of Jack Daniels.  Rock n’ Roll baby!

The whole feel of the gig was rough-n-ready with a slightly awkward stage presence while a film of what looked like an episode of ‘Police Camera Action’ was projected onto the wall behind the band, all added to the atmosphere and a performance of little polish.

It was a great night out with my brother and some friends and we even had time to nip back to Mr Foleys for a few jars, with Hardknott Dark Energy fitting the bill nicely.  Music and beer, what’s not to like.