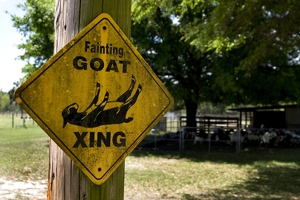 *A myotonic goat, otherwise known as the fainting goat, is a domestic goat whose muscles freeze for roughly 10 seconds when the goat feels panic. (Image from Irked Magazine).

I fancied brewing a biggish IPA of around 7.4%, akin to the strength of Magic Rock’s Cannonball, but the similarities end there. The malt bill is a little busy, and not my usual approach to brewing.  I like to read up on beer style and then work my own recipe around that.  This happens to be a brew that uses up a few odds and ends, and the resulting beer could be either inspired, or a messy waste of time, and hops.  The numbers below represent what actually happened, rather than the calculated recipe.

I collected 20L of wort, post boil, with an OG of 1.072.  Although on further inspection of the FV once it had settled, there was a couple of litres of hop matter.  This is consistent with the truly terrible run off from the boiler.  The hop stopper kept blocking up and I resorted to using a sanitised spoon to help things along.  Far from ideal.  Decided to stick with a stronger beer (albeit less of it).

This is my brew for the Yorkshire vs Lancashire homebrew challenge arranged as part of the Leeds International Beer festival 2013.  I opted to brew a West Coast Pale style Ale….this plan evolved mid-brewday:

I’ll add the usual info on temperatures etc at some point, but the main thing I learnt from this brew is that it isn’t safe to brew a Pale Ale while drinking super hoppy hoppy IPA and watching a beer review of Magic Rock’s Unhuman Cannonball.  I had already mashed in so the malts stayed the same, however my hop bill went out of the window and I delved into my freezer.  I stuck with the shorter volume collected and the higher OG.  I’ll add more dry hops than I originally intended on, et voilà!  A West Coast/West Yorkshire/Northern Hemisphere inspired India Pale Ale, of sorts.  The IBUs are lower than I would have aimed for had I intended to brew a 6.4% IPA, but the BU:GU ratio is still a respectable 0.86.

This beer will now be tasted alongside other Leeds Homebrew/Team Yorkshire beers, before we put forward our gladiator beers to be scrutinised by a panel of judges selected by the Leeds International Beer Festival.  Our Lancashire foe will be doing the same, and the best of Yorkshire will be pitted against theirs during the @LeedsBeer Fest in September.

This is my brew for the bar at the Northern Craft Brewers event on Saturday 13th April.  I opted to brew a Cascadian Dark Ale.  The recipe is based on my AG#5 Nebulous Pitch Black Ale, this time with more of an effort with the dry hopping.

Water treatments: Campden tablet (HLT), 1 tsp gypsum (mash). My weighing scales aren’t great and I only need 3-4g, which is a tsp (approx). Same rule for the epsom salts in the boil.  I ordered some 0.1-100g scales last week so that once I’ve looked at my water treatment in a little more detail, I’ll be able to weigh the salts more accurately.

My only mistake of the day was calculating the IBU using the Simcoe AA% as 12.2 when it was supposed to be 15%.  No big deal, the average IBUs were 57 and will now be more like 65.  Also, having had a hydrometer emergency I had to rush oer to HopZine Rob’s house and borrow one.  I’ve since purchased two new saccharometers which I’ll be taking good care of.

Once I reach the target 1.010 I’ll transfer to secondary and dry hop with at least 100g of Centennial pellets.  My first attempt with pellets.  It’ll then be transferred to a bag-in-a-box from which it will be dispensed to the good folk at the Northern Craft Brewers meet.

Had a crack at brewing an Imperial IPA last week (18/07/12).  I was back using my own kit, rather a bump back down to reality.  No supercharged boiler or immersion chiller to play with and boy did it tell.  Despite my best efforts the planned recipe changed during the brew.  (No photos as  I was busy mucking around sorting the issues).

Mashed for 60 minutes and temp remained constant.  Sparged at 78C, 12.05L liquor. I didn’t record the gravity readings, I’ll start doing this as soon as I can warrant buying a refractometer.

First hop addition of Columbus added to the copper during transfer from the mash tun (which blocked for the first time.  Last time I had a problem with running from the tun, it was due to the manifold coming apart) .  More Columbus at 45 minutes, followed by Simcoe at 30 mins.

Added a protofloc tablet at 15 minutes.  At the end of the boil the wort was cooled to 80C before further additions of Columbus, Centennial and Simcoe.  These were steeped while I ran to the FV, which was probably 40+ minutes thanks to a blockage.

Collected my target of 11L of wort post boil with SG of 1.068.  Having not been able to check my gravity before now, I was a little pissed off with missing my target OG of 1.089 by a country mile.  I decided to add a further 100g sugar (boiled on the hob for 10 minutes) which I calculate brings the OG to 1072.  As I had already strayed from the recipe and because the wort was looking a little on the light side, I also reduced 200ml of wort on the hob to add a little more colour. Cooled to 20C (which took hours due to cooling in the sink) and pitched my WLP090 yeast starter.

Due to the new OG I have demoted this brew from Imperial to Double IPA.  I’ll try and brew it again when I sort my kit out.  I really don’t know what went so wrong.  Despite that, the brew is happily fermenting and smells great.  If this turns out well, I may still enter it into the National Homebrew competition.

Some thoughts from CAMRGB on this beer here.